CCA and an FO…

Well a few weeks ago my Austrians FO and CCA turned up for the Kurrajong project. Austrians really have gone up a gear and are producing some fine models. There are obvious changes and additions that I will make but otherwise a very good model.

Changes here, Paint the steps, paint the buffers being careful not to fool the working parts. And get rid of those ‘orrible’ couplers.

The bogies follow the same concept as the BS/FS release by Austrians in that they have pick ups for interior lighting. I am not a fan myself and will most likely exchange these bogies for AR kit 2AA’s. I have yet to do anything about hook and chain couplers but I will get there.

Well interesting times in the model world with the releases of many new RTR products. Seems ages since I bought new rolling stock and now all of a sudden the flood gates are opening. The GSV’s, CW’s and CV’s have been purchased with a mix to be shared between the Kurrajong project and Bowen Creek. The FO and CCA will be here at the end of the month for Kurrajong and the BSV's will be here soon to go with a purchase of BCW’s for Bowen Creek. Not to mention the Tankers from SDS which could be here any day. I feel a bit like a collector as I am not modeling anything, which is a shame as I have AndIan Models BLV to build for Kurrajong, nice to see the cottage industry is still with us.

I have had a trip to Kurrajong last week, as my brother had his wedding there, so I went to check the village out. There is nothing there to find unless you know what you’re looking for and even then it’s pretty tricky. The odd land formation and that's it, but I did grab a photo or two for colour as its a bit different to western NSW 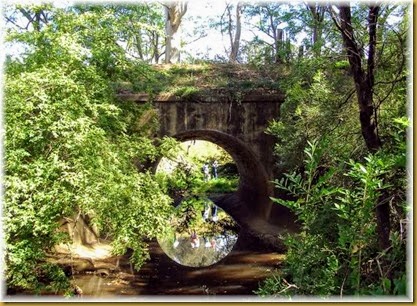 Can’t remember where I got this photo or who’s it is but it is at Kemsleys,  I like the “scubbyness” of the area.

I have been thinking about the model lately and because I have added some modellers licence, which I always intended to do, I may call it by another name such as Belpin or Bells line which would be in keeping with the line and area if it had been extended. I will ponder some more about this but I am liking the idea.

In recent weeks I have been getting bits and pieces done including the spline roadbed. What a great way to do roadbed, a little time consuming but cheap and the result is better than I have ever had. For ideas on how to do this see Ian’s blog. Other then that I have done a small mock up of the yard to see if I am happy with it. Some paper templates were used and bits I have placed where they should be and now that the yard is settled I can move on to securing the risers.

The goods loop consists of crane, goods shed and stock race. Loco will consist of turntable, water column, coal stage and ash pit. That will be sufficient to make a nice scene and keep the operation interesting. 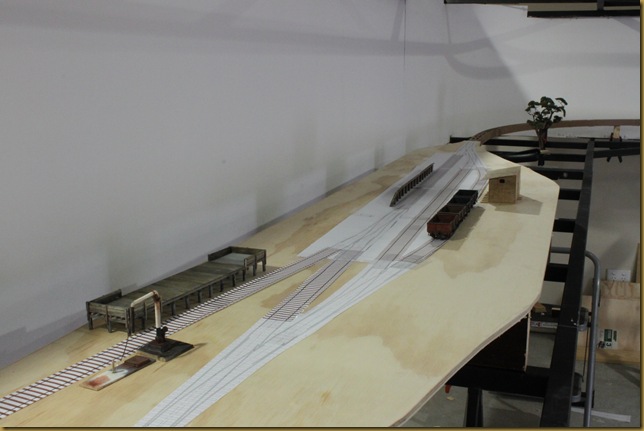 Back scene at the ready…

I have installed the backscene and painted a sealer coat. I purchased 3mm ply from the local hardware which curved nicely at the ends and middle to a radius of 10.5” which is quite tight. I am looking into having a photographic background this time so will see how it goes, I really don’t know when to install it, now or later? My next step was to do the pelmet and lighting but I think it will get in my way when it comes to the installing the track bed, so I may do the spline next.

This end will become staging with cupboard doors I think.

This snap shows the curvature as best I can.

There is a few shadows but you get what's going on.

Anyway a few bits of house keeping to do and I will get on the next stage.

Posted by Andrew Campbell at 6:13 PM No comments:

We Have Lift Off…

Legs have been built for the layout and I am surprised how well it turned out. I wouldn’t recommend this method for a straight layout or a permanent layout but because this is right angled it helps with its own support.

I used a work support from Bunning's as a leg. I removed the roller and manufactured a C channel section welded to a piece of 20mm SHS which slides into the 25mm SHS.

Bracket still needs a tidy up and painting.

The C channel then supports the frame and there you have it. The work support is adjustable so the height can be changed and adjusted for uneven floors. I will however stiffen the base a little more with some flat steel angled from the feet to the single support, this should take the last of the wobble out.

I will also replace the 25mm SHS with a longer length for added strength. The end result will equate to about $28 a leg which I think is pretty good. I have made four of them and I will use a single tent pole for the outside corner of the 90 degree angle.

Now I can move onto the hidden staging cupboard and backdrop.

I travelled to high school at Parramatta on the train. In 1933 I caught the train after riding my pony over from Hermitage Road where we lived. I put the horse in the Station Master's Paddock and caught the 06:20hrs train in the morning. The first train after school was 18:20hrs from Parramatta and it arrived at Kurrajong at 19:50hrs. The trip took ½ hour from Richmond to Kurrajong; it was slow when you were stopping at all the little stops.

At other times it wasn’t uncommon for me to ride my push bike to Richmond, but in the afternoon I would put my bike on the train for the ride home. I remember there was a landing out through the door and on the edge of the landing there was a chain that formed part of the handrail. I used to chain my bike to it, a lot of kids did that.

The railway carried a lot of fruit and vegetables in covered wagons. In the end, trucks carrying the vegetables direct to the markets substantially reduced the amount of freight on the line.

It gave a good ride with plenty of soot and rickerty rick. If you were meeting anyone at Kurrajong you would stand on the station there and hear the Pansy's whistle blowing as it came up the hills through the bush. It was an institution then.

Kurrajong was a very big holiday place in its day. In the 1940’s, guest houses were everywhere, there must have been 20 or 30 of them. They were scattered along Comleroy Road up to Kurrajong and Kurrajong Heights. They would put 6 carriages and another engine on to help in holiday times as it was a climb to the platform.

The railway served a great purpose when it first started. The carriages were open right through and had the roll back type seats that you could roll over to face the direction you were going. There were racks up the top to carry your luggage, I think towards the end they even had a toilet on some of the carriages, it was very modern then.

Tiger Kelly was the guard and he was from Richmond. We always got to know the guards but not the engine drivers. They wore a normal railway uniform, waistcoat and cap. Kurrajong had a Station Master and a Porter. The last Station Master at Kurrajong was Frank Brown and Roy Reverger was the assistant. Frank lived in the station masters’ house in Kurrajong.

The trip cost 2/- for a weekly ticket, that was when I started to work. We used to get a railway pass for school. When I went to Richmond on the train I remember it used to cost 9d and the whole trip to Sydney was about 3/- or 4/- I think.

Pansy made about 6 or 7 trips a day. It was fairly well patronised until the late 40’s when private cars became popular and Jim and Roly MacMahon started buses up. They ran their buses from Kurrajong to North Richmond.

The dams in Peels paddock gave way during flood times and took the railway line with it. The line was fixed a couple of times but it closed due to cost. There was a pretty big protest meeting when the government announced the lines closure. I often think that it would be such a novelty today, it's a shame it ever closed.

Posted by Andrew Campbell at 2:54 AM 3 comments:

The frame is now coming along but still needs a few adjustments and strengthening. I wouldn’t make a welders bum but it seems to be holding together OK. I will add some stiffeners  just to be safe. Overall it isn’t to heavy but I am not to worried about weight this time as it wont be moved very often. There is only three modules all much larger than Bowen Creeks ever were so they will get heavy. The steel is 25mm SHS and was really cheap at $15 for an 8 meter length.

Bit difficult to see but I think you will get the jist of it.

Threaded rod is used to connect the ceiling to the base rather than welding.

Next the frame will need tidying up and a coat of black paint but will probably have to wait until the first weekend in Feb.

Posted by Andrew Campbell at 1:38 AM 2 comments: